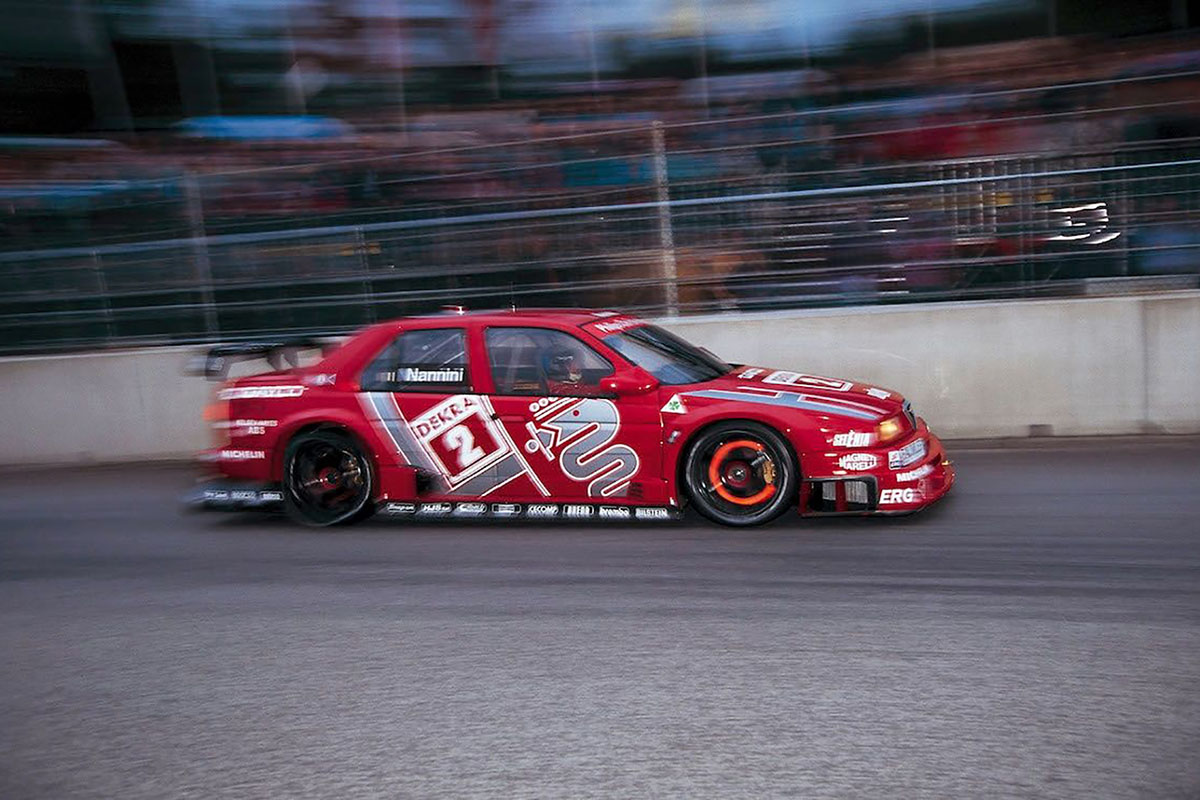 It often happens that someone ask me to remember the controversial Singen episode between Alessandro Nannini and Roland Asch, in the penultimate event of 1994 DTM.

In that season I was Alessandro Nannini’s Race Engineer and I lived those moments personally onsite.

Much has been said about that episode (many times with any logical sense), what happened and how Mercedes has put Alfa Romeo out of the fight for the DTM titles.

Over the years I have rethought many times about it, concluding that, to understand, it is good to retrace the history of Alfa Romeo in the years of the DTM / ITC.

1993 is remembered for the exciting and unexpected wins; the most unforgettable moment was at the Nordschleife when Nicola Larini, at his debut on that circuit, won both races, and later he became Champion at the end of the season.

However, considering these numbers, which confirm to the unquestionable quality of the project, Alfa Romeo won only in 1993 which was the first year.

What was missing to get other titles? Certainly better reliability, with all the car models used.
The withdrawals recorded during the seasons, especially from 1994 to 1996, cost important points which conditioned the final result.

In 1995 was introduced a new technical regulation that allowed much more freedom in sensitive areas of the car, but the problem for Alfa Romeo was that it was made official by the German organizers only very far in the 1994 season. There are no elements to say that it was intentional, to delay the construction and development of the cars, which we remember extremely complex in electronically controlled devices.
But that’s what happened in early 1995 and indeed the limited development compromised the final result of that season.

In 1996 ITC Alfa Romeo lost the Constructors’ Championship by 9 points, behind Opel which, we remember, ran with four wheel drive Calibra. To try to reduce the performance gap from Opel, a new engine was designed and developed in the middle of the season, with a new angle of 90 degrees for the banks; it was much powerful, lighter and little compared to the previous one V6 with 60 degrees.
From that moment, with 12 races to go, Alfa Romeo won the most (7), Mercedes 3 and Opel 2. These are numbers that speak for themselves.

That engine was strongly desired, and built in a very short time, by the Alfa Corse managers but was equally fiercely opposed by the FIAT Auto leaders, who had already decided to close the ITC program. Decision questionable as long as you want on the sports and marketing level, but understandable in terms of pure income statement, considering that the overall budget of the ITC program was equivalent to one of a well-ranked F1 team.

It should also be remembered that the number of cars lined up had increased from six to eight, with four different teams, leading to extremely penalizing economic, managerial and sporting problems.

Last but not least, some relationships and figures changed within the FIAT group, which compromized (in terms of political and economical support) the position of the group among DTM / ITC partecipants.

The race is remembered years later for the unbeliavable manouvre done by Roland Asch (Mercedes) against Alessandro Nannini, who was still in fight for the Drivers’ title, and for his sensational reaction against the german driver happened two laps later. All documented by the television images that still ignite the hearts of the fans today.

The question to ask is: beyond the totally unfair crash into the Alfa Romeo, did Asch really pull out Nannini and the italian brand from the challenge for their respective titles?

To understand the genesis of this episode, which occurred 3 laps from the end of Race 2, some things must be remembered: the 1994 DTM Sporting Regulations allowed to use a different car (of the same brand) if the driver needed it, same model used by another driver. Two weeks earlier, on the Avus circuit in Berlin, Alfa Romeo lined up Stefano Modena to help Larini and Nannini, using the car that had been brought up to that time by Stefano Buttiero as T-car. Modena was third in qualifying and won both races, but unintentionally this episode created thrilling moments within the team that would have repercussions some days after.

From Avus to Singen: on the Allemanenring Modena got the pole position ahead of Larini (+0″02) while Nannini was sixth (+0″70); the qualifying session was on dry conditions.

We woke up on sunday mornig with a soaked circuit and both races ran in the wet. At the start of Race 1 Modena made a mistake in the first corner and Larini took the lead. Nannini made an excellent start gaining the third position.

On Lap 3, Nannini tried to overtake Modena inside T1 but the his car went in slight oversteer; as a consequence his left rear touched Modena’s front bumper on the right corner, leaving Nannini out in the tyre wall with some damages both on front and rear of the car.

Team Principal Giorgio Pianta declared during the live coverage that if Nannini remained third at the end of the race, Larini and Modena would let him pass for the win.

Nannini remained second, but with the front bumper broken on the left side and the hood partially detached, which was raising on the driver’s side at high speed. But the worst damage, however, involved the engine oil cooler, which had a leak.

On Lap 6 Nannini headed back into the pit due to the oil cooler damage, losing two laps. After a quick fix, he made few laps just to check if the car was ok for Race 2, but he came back to retire definitely as the damage of the engine was irreparable. And with no chance to replace the engine in time for the start of Race 2, Alfa Romeo no longer had the real possibility of placing six cars in the first six places, in neither of the two races.

Meanwhile Modena lost the fourth gear from Lap 9 but he was able to keep the position until the chequered flag. Ludwig, who was the other title’s contender, stopped on Lap 24 and was towed to the pitlane.

Race 1 ended with 5 Alfa Romeo in the first 5 places, as sixth finished Reuter with the Opel Calibra 4WD, seventh was Van ommen with the best Mercedes.

In the reparation time between, our mechanics were in rush to prepare a new car for Alessandro Nannini; the one selected for this operation (allowed by Sporting Regulations) was the 155 used by Giorgio Francia. The driving position was adapted to Nannini but the gearbox control remained the classic “H” command instead of the double lever sequential specific for the tuscan driver. An additional difficulty, and not a small one, in a street circuit like Singen.

No weather changes for Race 2, again on wet track.

On the first lap, we had four Alfa Romeo in the first four places: Larini, Danner, Nissen and Modena (still without the fourth gear).

On Lap 11 Nannini climbed to sixth, having passed all Mercedes, with only Reuter on Opel to separate him from the other four Alfa Romeo. Reuter, also on four-wheel drive car, however, did not allow him to approach as quickly as he would have liked.

On Lap 18 Van Ommen was out, preceding Nannini in the Drivers’ standings.

On Lap 25 Larini doubled Ludwig, giving the measure of what the Alfa Romeo’s performance was.

One lap later, Nissen tried to overtake Danner inside the last hairpin but hit him and they both stopped. Modena gained the second place and, just few second later, Danner and Nissen rejoined the race. Always five Alfa Romeo on top with Larini, Modena, Danner, Nissen, Nannini ahead of Reuter, Schneider, Asch and Ludwig.

On Lap 29 Modena also doubled Ludwig and Schneider. Schneider and Asch let Ludwig pass and he moved to seventh position.

At 6 laps to go Nannini was fifth and Ludwig seventh.

Two laps later, Danner stopped due to the damages from his previous crash with Nissen.

With 3 laps to go, Asch hits Nannini in the last hairpin, and the italian spun. Nannini came back quickly into the pitlane to fix damaged parts of the bodywork. Nissen also stopped in the same lap suffering damages from the clash with Danner.

Nannini lost one lap, then rejoined the track just behind Asch, rammed him at turn 5, arriving with the engine on fire into the next chicane.

This is the chronicle of that rainy Sunday in Singen.

I spent a good part of my life on the pit wall, so I know how difficult it is to plan and implement a race strategy especially when it involves six drivers from two different teams, even if from the same manufacturer. And on that occasion there were at least three circumstances, unforeseeable before the start, which prevented obtaining the maximum possible result.

The first, paradoxically, was the performance of the Alfa Romeo 155 V6 TI in the wet on a street circuit like Singen: in Race 2 Larini and Modena lapped all other drivers. On Saturday, with a dry track, the performances compared to Mercedes had been good, in line with what had been seen up in the previous events on the other circuits that were favorable to us, but nothing that could have predicted such a clear superiority. On Sunday, on wet, the 4WD cars showed its effectiveness. In summary: we did not imagine that we had so much gap to manage the race at our leisure.

The second circumstance was Nannini’s maneuver on Modena in Race 1, which took everyone by surprise because none of us expected it, at least so early. The provisions given to the drivers in the pre-race briefing were clear: Nannini was the driver who should have come as far as possible to keep the Drivers’ title open. Everyone else should have tried to get ahead of the Mercedes because the gap in the Constructors’ championship was recoverable.

The third was the contact at ten laps from the end of Race 2 among the surviving Schübel drivers, after Giorgio Francia had gave his car to Nannini for Race 2. This allowed Mercedes to climb up in the standings and score very heavy points for the Contructors’ championship.

The story of Singen 1994 is this and there is no “rewind” to rewrite it.

“Did Asch really eliminate Nannini and Alfa Romeo from the challenge for their respective titles? ”

We consider the best of hypotheses, two wins for Nannini and six Alfa Romeo cars in the first six places in the two races. We keep the finish order about other drivers as well as the rankings of the final event in Hockenheim. Here is the result:

Ludwig would still have won the Drivers’ title.

For the Constructors’ title, I think they would hardly let us win…

Photos, images and video clips are property of their owners