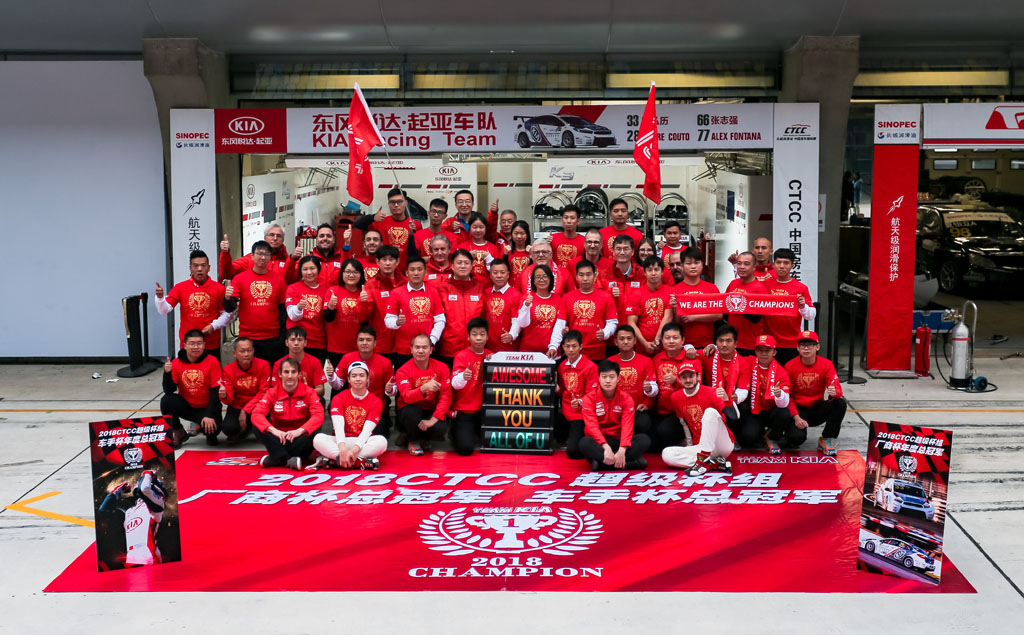 Once more, the last event of the season has seen the KIA 2.0 T race cars as protagonist, as usual technically supported by Hexathron Racing Systems staff: despite an extremely penalizing Balance of Performance, which in the last round of the season has made life difficult to KIA Team drivers, the final success in the Manufacturers’ championship came thanks to the extraordinary win performed by Alex Fontana in Race 2. Started from the second row, the swiss driver was able to conquer the race leadership just after few meters with a double overtaking against Martin Cao (Ford) and his team-mate Leo Ye Hongli, increasing lap after lap his gap up to the checkered flag, sealing the seventh win of the season for Team KIA Racing China.

An important and strongly desired success for the team headed by John Ling, the first in the 2.0 Turbo era that follows the two titles won in 2015 and 2016, again with the technical support of Hexathron Racing Systems.

Marco Calovolo (Hexathron Racing Systems CEO): “It has been a tough end of the season, no doubt, where we did a very hard work to conquer the Manufacturers’ championship title, a result we achieved thank to the amazing job done by all members and drivers of Team KIA Racing China. Of course, it’s great to have the young Leo Ye Hongli as champion, beating a very professional and competitive opponents like Ford, Volkswagen and BAIC with their international drivers such as Huff, Turkington, Morgan, Oriola and Hua. The KIA cars proved to be a winning car on every kind of circuit, as evidenced by the wins achieved in Zhuhai, Guangdong, Ningbo, Tianma and Shanghai, thanks also to the important and profitable work done by all Hexathron Racing Systems staff, always present during test sessions and in every CTCC event, who I want thank you very much. Now the target is to replicate the result in 2019, and we have already started to work on the next season planning new updates for the KIA K3 2.0T race cars during the winter, to be on top since the first race.“