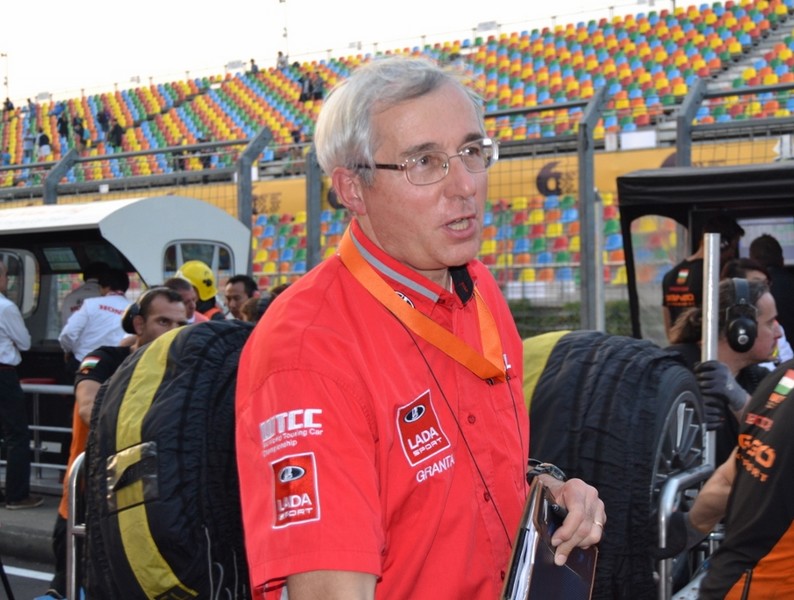 If you attend any FIA World Touring Car Championship (WTCC) race and wander down the pitlane, you will more than likely stumble across a tall, silver-haired gentleman who goes by the name of Marco Calovolo; one of the most experienced race engineers in the touring car world.

Having worked for many years in the DTM, Formula 1 and with Alfa Romeo, Marco is a highly respected figure within the touring car paddock and now works as a race engineer for the LADA Sport Lukoil team.

He joined LADA Sport Lukoil together with two-time BTCC Champion James Thompson – an incredible duo focused on achieving the team’s first win in 2014 in one of the highest profile and challenging motorsport arenas after F1.

Marco is also CEO of his own company, Hexathron Racing Systems, which was established a few years ago when Calovolo left Alfa Romeo after the italian marque called time on its motorsport activities.

Marco was happy to sit down with us to share his thoughts, ideas and projects for the approaching racing season.

2013 was LADA’s first full season in the WTCC. How do you think it went?
“Very positive indeed if we consider the limited dimension of the LADA Granta road car, from which the race car has been designed to comply accordingly with the 2013 FIA technical regulations. I am not too far from reality when I say that our car was one of the smallest in the field. Nevertheless, we worked very hard all season to compensate this handicap, and in the final few races we were able to extract very good performance from the car, which in turn allowed James Thompson to fight for podium positions. Great credit goes to James, who gave us fantastic feedback while setting up the car and for his bravery in every race. Of course, nothing would be possible without the enormous amount of work produced by the LADA Sport LUKOIL racing team, which is passionately led by our Team Principal, Victor Shapovalov. From the first race to the last, we had an endless flow of new parts, the majority of them designed and manufactured by LADA Sport to improve our performances. Last but not least, the ORECA team supplied us with not only the engine and its electronic management, but a strong technical/logistic support too. The 2013 WTCC season has been one of my best seasons ever for the technical progression from the beginning to the end.”

LADA developed a brand new car last season – the Granta 1.6 Turbo – using it only in 2013 before the incoming new rules. What are the key points of the car and which parts will still be useable on the 2014 version?
“The new FIA 2014 WTCC technical regulations are completely different compared with 2013. We’re simply talking about a whole new generation of racecar. I deem the new rules to be extremely positive for LADA, because we can re-design the car; changing necessary components that will help us reduce the gap to the leading competitors. In 2013 we tested a lot of different setups looking towards the forthcoming season, so when it came to designing the new car, our designers already had vital information. To answer the question, very few parts shall be saved from the old to the new car.”

FIA and some manufactures want new technical and sporting regulations to match that of its German counterpart, the DTM. What effect do you think it will have on the series and what challenges will they bring with them?
“Well, as always when changes come in, you may find opportunities in the rules and work them to your advantage to give you an edge over your competitors. For the “racing people”, as we are, these changes are highly positive: new, more appealing toys to play with. I remember when in 2002 we had to downgrade our cars from Super Touring to S2000, which was a real shock. Once you upgrade your car and everything’s okay, you don’t generally hear anybody complaining about the new regulations. I believe that the biggest challenge isn’t a technical one, but with the 2014 WTCC racing calendar: the first four events will be held within five weeks. It means that everything and everyone must be working perfectly from the word go, no excuses.”

WTCC fans, drivers and the motorsport world seem to be equally split between who is in favour of new rules and who is against; more performance could mean less battles on track and, for sure, an increase of the cost for every team. What is your opinion as a race engineer seeing the evolution of touring cars in recent years?
“When speaking of evolution, I like to remind myself of a famous Charles Darwin quote: “It is not the strongest of the species that survives, nor the most intelligent. It is the one that is the most adaptable to change.” So, I don’t think that the new cars will force the drivers to be less aggressive on track as they will quickly adapt themselves to the new performance. I believe instead that a handful of previously dull circuits led to processional racing, but this year the issue has been sorted. We have three fantastic new circuits to learn; Spa-Francorchamps, Paul Ricard and Suzuka GP, which are among the best tracks in the world and are incredibly challenging for both driver and team. The budget necessary to be on top is another story. For sure it’s not cheaper than in the past, but it’s an old truth that racing is expensive anyway. What makes me wonder is that, as I have said before, at the end of 2001 a decision was made to abandon the Super Touring cars because it was deemed too expensive. The consequence was to make the new S2000: all the manufacturers spent a huge amount of money building those models, simply because the roadcar parts that had to be compulsorily fitted in the car were undersized. There were five-speed gearboxes, the year after that the six-speed sequential was introduced and they were followed by poli-carbonate windscreens, bigger brakes, turbo engines, dry sump, carbon doors and so on. Having been Managing Director of a top team in touring car racing for years now, I never noticed any reduction of the necessary budget from one year to the next.”

What are your expectations for the forthcoming season?
“We will have a brand new car, which is supposed to be considerably faster compared with the 2013 car. The new rules are working more to our advantage than for our competitors and with that we hope to hit the ground running.”

Rob Huff and James Thompson join forces at LADA in 2014 – two Britons with a vast amount of experience in touring cars under the same roof. Will they be able to help the team reach its first win this year and, maybe, the title or do you expect some internal fights?
“I believe that both of them are among the best five drivers in the current WTCC field, therefore the LADA Sport LUKOIL team has one of, if not the strongest driver line ups for the 2014 season. Also, let’s not forget Mikhail Kozlovskiy too, who now has a year’s WTCC experience under his belt. The 2014 car should be easier to drive compared with the sometimes grumpy LADA Granta WTCC from 2013. We have to maximise our test sessions by sharing the development programme between both Rob and James. During a race weekend, a driver is mainly focused on his performance, but I do not expect any unsafe rivalry between our drivers. To be part of the LADA Sport Lukoil team is huge motivation for them, but carries with it a great deal of responsibility too. The title? Honestly, I think we need to start winning a few races before we set our sights on the title.”

Before joining WTCC, you had worked in F1 and DTM. As we know, DTM 1993-1996 was a remarkable era of touring cars, what are your impressions of it?
“In those years, the standing to be competitive in DTM was very similar to the one needed for Formula 1 racing, where I went in 1997. I could then realize that the works Alfa Romeo team we had in DTM could manage to be consistently in the first half of the GP grid. The Alfa Romeo DTM was not a touring car, as we are now used to consider, it had more technology and solutions closest to Formula 1 car. No mention for the budget…”

Hexathron Racing Systems is not focused only on LADA and WTCC. What are your other main projects for 2014 and which people will be involved on those?
“Hexathron Racing Systems provides technical advisory in motorsport for several different customers and partners. I would like to remind, and to thank PB Racing, in the person of its president and WTCC legend Stefano d’Aste, for the trust by committing our company for designing and development of the new Lotus Elise Cup PB-R, and more projects related with the legendary Lotus brand. Hexathron Racing Systems has then a close partnership with ARC_Team, thanks to its president Andrea Rossetti, italian leading company in the professional driving simulation, focused on design, production and sale of high level simulation systems for any professional motorsport activity. We are collecting a good number of endorsements, both from high profile drivers and teams, appreciating the powerful opportunity to match the normal track activity with the simulation engineering. All Hexathron Racing Systems staff and myself we are full time involved in these projects. My aim is also to give to the young engineers the possibility to approach the motorsport world with a professional tutoring: we are thinking to organize a school for them in order to give an additional and specific education to the university. It’s not easy, but we don’t like easy things…“

Solid race weekend at @misanoworldcircuit for the