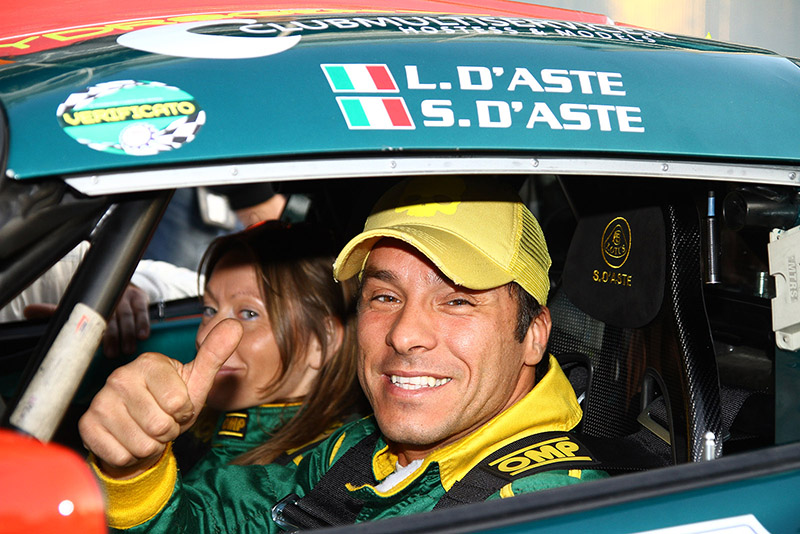 After a season dedicated to Lotus Cup Italy as organizer, Stefano d’Aste returns behind the wheel and it will be in a top level event. The FIA WTCC 2007 “Indipendents” World Champion will be one of the protagonists in the 12th Monza Rally Show, scheduled for November 28 to 30 at Autodromo Nazionale of Monza. The strong driver from Genoa, with his sister Linda as co-driver, will be at the start with a Citroen DS3 WRC prepared by D-Max Racing and technically supported by Hexathron Racing Systems and Marco Calovolo, with whom have conquered many successes in the World Touring Car Championship and in some rallies with the Lotus Exige R-GT.
After the wonderful performance scored in 2011, when he reached the foot of the podium with “his” Lotus, putting behind several World Rally Car, Stefano d’Aste is again ready to fight for the podium, and to get ready, he will be in the race this weekend too, ever in Monza, with a Skoda Fabia S2000 during the 3rd Monza Rally Ronde organized by Vedovati Corse, always with the support of Hexathron Racing Systems.

Stefano d’Aste: “I’m really really happy to get back in the race after an excellent interlude of Lotus Cup this year, where as PB Racing we had a lot of positive feedbacks. Being at the start of the Monza Rally Show with a Citroen DS3 WRC will be something spectacular, I hope to have fun and, of course, to get a good result and, above all, to entertain the many fans who will be in Monza! We are preparing all the best, the DS3 WRC is very very powerful and it has won a lot, the ideal weapon to be among the leaders in a competitive event as the Rally of Monza.”

Marco Calovolo (Hexathron Racing Systems): “To be in Monza with Stefano and D-Max Racing is an excellent opportunity to return to my first love, the rally. Immediately after the WTCC race of Macau we will start to work on DS3 WRC that we had the opportunity to touch few days ago at D-Max’s workshop, a team really well prepared in this area. To make things better, we will be too at Monza Rally Ronde this weekend. Monza Rally Show is an event where we can achieve a really good result, with Stefano and the DS3 WRC we have the perfect mix to dream the the victory.”

The 12th Monza Rally Show will start in the afternoon of Friday November 28, with the SS1 “Circuito 1” scheduled at 16, immediately followed by the SS2 “Monza 1”. The event will continue on Saturday, with another five special stages and it will end on Sunday morning after 166 kms. In the afternoon, the Master Show will make excited the thousands fans who will be in the main grandstands, a special “race in the race” which will take place on the main straight.