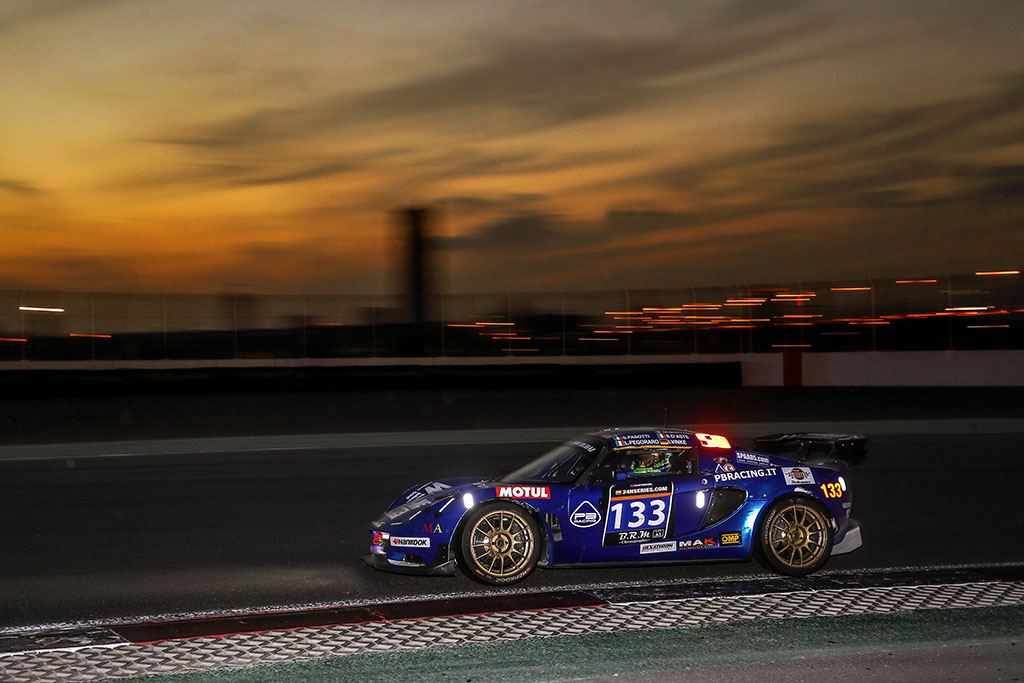 Great start of 2017 racing season for PB Racing, Hexathron Racing Systems and the Lotus Elise Cup PB-R: in the Dubai 24 Hours race, the italian team took a spectacular 3rd place in class and 47th overall (99 cars at the start) with the little GT already protagonist in the Lotus Cup Italy and, more recently, also in the States. A result that could be (easily) a win without five laps lost in the night due to a contact with another car, that forced the blue Elise to fight only for the third place with its four drivers: Stefano d’Aste, Stefano Pasotti, Lorenzo Pegoraro and Michele Bartyan, all authors of an excellent performance despite the difficult conditions that characterize this endurance race.

Stefano d’Aste (PB Racing): “Amazing results, what a race! It was really tough but we had a car to fight on top and a great team behind it – headed by engineer Marco Calovolo – which allowed us to overcome all the difficulties and get a fantastic podium after really hard 24 hours. Pasotti and Pegoraro did a very good job, whose result confirms Lotus Cup Italy has been a great school for them, to grow and to get ready for a difficult race. Bravo also Bartyan that, thanks to his experience, has helped a lot Lorenzo and Stefano. What to say? We did two endurance races not easy: one at Thunderhill 25 Hours and the 24 Hours of Dubai, both finished on the podium, and for this I can only be proud for what we got and for the car we have realized, the Elise Cup PB-R; I’m happy to confirm that the production of this car will continue until 2021.”

Stefano Pasotti: “It was a very difficult and very hard race, specially in terms of physical condition and concentration; You need thousand eyes to control and chack the many cars on track, and for these reasons I’m really happy about the result. A great experience where the team have worked really well during the whole event. The car has proved once again its performance, we arrived at the end without any mechanical issue despite two hard contacts with other cars.“

Lorenzo Pegoraro: “The Dubai experience was unique, unforgettable. Participating in the opening round of a championship like 24H Series gives you the opportunity to understand how you have to work in order to prepare a race like this. Thanks to PB Racing and Hexathron Racing Systems we have got a great result, performed by an excellent synergy that has been established between team and drivers during this long marathon. The car has simply confirmed its performance and realiability, no one problem during the whole event.”

Michele Bartyan: “It has been nice to return on track after years off, nice to do it together Stefano d’Aste who I consider today a friend and a tenacious rival of the past. The race was very tough physically, so many cars on track so could be very easy to make mistakes. Personally, I am satisfied, I made no mistakes and helped all in my best way; perhaps the last stint I could have a better pace but my energy was gone and I preferred to bring the car safely to the end. Sweet experience for the class podium and for the high level of the participants, some former F1 drivers and many professionals of the official teams. Special thanks to all PB Racing staff, to Hexathron Racing Systems and to engineer Marco Calovolo, who worked really hard with a so tight schedule to give us a perfect car in every session.“